The fifth generation of the Quattroporte (Tipo M139) was unveiled to the world at the Frankfurt Motor Show on 9 September 2003 and made its U.S. première at the 2003 Pebble Beach Concours d'Élégance; production started in 2004. Exterior and interior design was done by Pininfarina. Built on an entirely new platform, it was 50 cm (19.7 in) longer than its predecessor and sat on a 40 cm (15.7 in) longer wheelbase. The same architecture would later underpin the GranTurismo and GranCabrio coupés and convertibles. Initially it was powered by an evolution of the naturally aspirated dry sump 4.2-litre V8 engine, mounted on the Maserati Coupé, with an improved output of 400 PS (294 kW). Due to its greater weight compared to the Coupé and Spyder, the 0-62 mph (0–100 km/h) time for the Quattroporte was 5.2 seconds and the top speed 171 mph (275 km/h).

The Maserati Quattroporte was initially offered in only one configuration, equipped with the DuoSelect transmission. The base Quattroporte DuoSelect was recognizable by its chromed grille with horizontal slats; adaptive Skyhook suspension and 330 mm brake disks with four piston callipers all-around were standard. Maserati put emphasis on personalization, offering customers a choice of fifteen exterior paint colours, Poltrona Frau leather upholstery in ten hues, contrasting seat piping and stitching and three types of wood inserts. At the Frankfurt Motor Show in September 2005 Maserati introduced the Executive GT and Sport GT trim levels. 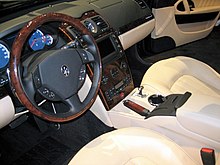 A Maserati centre showing 2012 models of Maserati Quattroporte and a Gran Cabrio on the right side.

A new automatic transmission was presented at the Detroit Motor Show in January 2007, with the first cars delivered right after the launch, marketed as Maserati Quattroporte Automatica. As all three trim levels were offered in both DuoSelect and Automatica versions, the lineup grew to six models.

The Quattroporte Sport GT S was introduced at the Frankfurt Motor Show in September 2007. Taking further the Sport GT's focus on handling, this version employed Bilstein single-rate dampers in place of the Skyhook adaptive system. Other changes from the Sport GT comprised a lowered ride height and 10 mm wider 295/30 rear tyres, front Brembo iron/aluminium dual-cast brake rotors and red-painted six piston callipers. The cabin was upholstered in mixed alcantara and leather, with carbon fibre accents; outside the door handles were painted in body colour, while the exterior trim, the 20 inch wheels and the exhaust pipes were finished in a "dark chrome" shade.[31]

At the 2008 NAIAS Maserati launched the Quattroporte Collezione Cento, a 100-examples limited edition. Its unique specification featured an ivory paint colour with a waist coachline, matched to Cuoio tan tufted leather upholstery and Wengé trim inlaid with mother of pearl. Standard equipment comprised most of the available infotainment optionals.

Images of the facelifted Quattroporte appeared on the Internet on 30 January 2008; the car made its official début at the 2008 Geneva Motor Show. Overseen by Pininfarina, the facelift brought redesigned bumpers, side sills and side mirrors, a convex front grille with vertical bars instead of horizontal, new headlights and tail lights with directional bi-xenon main beams and LED turn signals. Inside there was a new navigation and entertainment system. All Quattroporte models now used the ZF automatic transmission, the DuoSelect being discontinued.

The 4.2-litre Quattroporte now came equipped with single-rate damping comfort-tuned suspension and 18 inch wheels. Debuting alongside it was the Quattroporte S, powered by a wet-sump 4.7-litre V8, the same engine of the Maserati GranTurismo S, with a maximum power of 430 PS (316 kW; 424 hp) and maximum torque of 490 N·m (361 lb·ft). In conjunction with the engine, the braking system was upgraded to cross-drilled discs on both axles and dual-cast 360 mm rotors with six piston callipers at the front. Skyhook active damping suspension and 19 inch V-spoke wheels were standard. Trim differences from the 4.2-litre cars were limited to a chrome instead of titanium-coloured front grille. Production of the restyled vehicle started in June 2008 as Model Year 2009.

The Quattroporte Sport GT S was premièred at the North American International Auto Show in January 2009. Its 4.7-litre V8 produced 440 PS (324 kW; 434 hp), ten more than the Quattroporte S, thanks to revised intake and to a sport exhaust system with electronically actuated bypass valves. Other mechanical changes were to the suspensions, where as on the first Sport GT S single-rate dampers took place of the Skyhook system, ride height was further lowered and stiffer springs were adopted. The exterior was distinguished by a specific front grille with convex vertical bars, black headlight bezels, red accents to the Trident badges, the absence of chrome window trim, body colour door handles and black double oval exhaust pipes instead of the four round ones found on other Quattroporte models. Inside veneers were replaced by "Titan Tex" composite material and the cabin was upholstered in mixed Alcantara and leather. 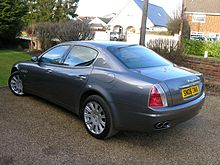 Rear of the pre-facelift Quattroporte V 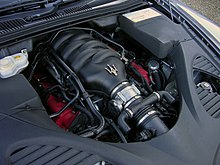 The tyre, ring and brake style of Quattroporte

The Quattroporte body is a steel unibody, with aluminium boot lid and engine bonnet; Cd is 0.35. Front and rear aluminium subframes support the whole suspension and drivetrain.

A 47%/53% front/rear weight distribution was achieved by setting the engine behind the front axle, inside the wheelbase (front-mid-engine layout) and the adoption of a transaxle layout. With the later automatic transmission - fitted in the conventional position in block with the engine - weight distribution changed to 49%/51% front/rear. The suspension system consists of unequal length control arms with forged aluminium arms and hub carriers, coil springs and anti-roll bars on both axles.

The DuoSelect electro-actuated transmission available at the launch of the fifth generation Quattroporte was a development of the CambioCorsa unit first used in the Maserati Coupé. It was a Ferrari-based semi-automatic transmission, mounted at the rear axle in block with the differential in a transaxle layout, with the twin-plate dry clutch located in a bell housing attached to the rear of the engine. A torque tube joined rigidly together the two units. Gear shifting was done via the standard paddle shifters behind the steering wheel; there was no gear lever on the centre tunnel, but rather a small T-shaped handle used to quickly engage first gear and reverse when manoeuvring at slow speed.

The 6-speed torque converter automatic transmission was a 6HP26 supplied by ZF Friedrichshafen. Unlike the DuoSelect it was placed in the conventional position right behind the engine; to accommodate it and the new rear differential the front and rear subframes as well as part of the transmission tunnel had to be redesigned. Manual shifting was possible by the centre-console mounted gear lever; in addition Sport GT cars came equipped with paddle shifters as standard, while on other models they were an optional extra.

All Quattroporte models were fitted with a limited slip differential.

The V8 engines of the fifth generation Quattroporte belonged to the "Ferrari-Maserati F136" family; they had aluminium-silicon alloy block and heads, a crossplane crankshaft, four valves per cylinder driven by two overhead camshafts per bank and continuous variable valve timing on the intake side. F136S 4.2-litre engines in DuoSelect equipped cars used a dry sump lubrication system; F136UC 4.2-litre engines on automatic cars were converted to use a wet sump oiling system, as did the later 4.7-litre, codenamed F136Y.

If you have Maserati and are considering to sell your car, then please call us and discuss your requirements. We offer a very competitive and unique package for all our clients, so please call for further details.

All our pre-owned Maserati's come with the following: