The vehicle was unveiled at the 2007 Geneva Motor Show. The GranTurismo has a drag coefficient of 0.33. The standard version has a 4.2 litre (4,244 cc (259.0 cu in)) V8 engine designed in conjunction with Ferrari with 405 PS (298 kW; 399 hp) and automatic ZF gearbox six-speed transmission. The 2+2 body has been derived from the Maserati Quattroporte V, with double-wishbone front suspensions and a multilink rear suspension. The car is a GT (Grand Tourer) that emphasizes comfort in harmony with speed and driver-enjoyment.

The vehicle was unveiled in 2009 Geneva Motor Show.

It is a customization programme based on the works on GranTurismo MC Concept. Changes include front and rear carbon-fibre spoilers, carbon fibre mirror housings and door handles, 20 inch wheel rims, carbon fibre interior (steering wheel rim, paddle shifters, instrument panel, dashboard, door panels), stiffer springs, shock absorbers and anti-roll bars with custom Maserati Stability Programme software and 10 mm (0.4 in) lower height than GranTurismo S. The programme was initially offered in GranTurismo S, with the product line expanded to all GranTurismo vehicle and all Maserati vehicles in 2009. Fifteen GranTurismo MC racecars were developed, homologated for the European Cup and National Endurance Series, one of which was taken to be raced by GT motorsport organization Cool Victory in Dubai in January, 2010.

Replacing both the GranTurismo S and S Automatica, the Granturismo Sport was unveiled in March 2012 at the Geneva Motor Show. The revised 4.7L engine is rated 460 PS (338 kW; 454 hp). The Sport features a unique, MC Stradale inspired front fascia, new headlights and new, sportier steering wheel and seats. The ZF six-speed automatic gearbox is now standard, while the six-speed sequential transaxle is available as an option. The latter has steering wheel-mounted paddle shifters, a feature that’s optional with the automatic gearbox. 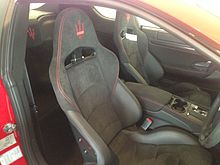 In September 2010, Maserati released that they will be officially showing a new version of the GranTurismo - the MC Stradale - at the 2010 Paris Motor Show. The strictly two-seat MC Stradale is more powerful (450 PS or 331 kW or 444 hp), friction reduction accounts for the increase, says Maserati, thanks to the strategic use of “diamond-like coating", an antifriction technology derived from Formula 1, on wear parts such as the cams and followers. It is also 110 kg lighter (1670 kg dry weight) from the GranTurismo, and more aerodynamic than any previous GranTurismo model - all with the same fuel consumption as the regular GranTurismo.In addition to two slits in the bonnet, the MC Stradale also receives a new front splitter and rear air dam for better aerodynamics, downforce, and improved cooling of carbon ceramic brakes and engine. The body modifications make the car 48 mm (2 in) longer.

The MC Race Shift 6-speed robotised manual gearbox (which shares its electronics and some of its hardware from the Ferrari 599GTO) usually operates in an "auto" mode, but the driver can switch this to 'sport' or 'race' (shifts in 60 milliseconds in 'race' mode), which affects gearbox operations, suspension, traction control, and even the sound of the engine. The MC Stradale is the first GranTurismo to break the 300 km/h barrier, with a claimed top speed of 303 km/h (188 mph).[11] US market MC's do not have the "Stradale" part of the name, as they are sold with a fully automatic six-speed transmission rather than the one available in the rest of the world.[12]

The Brembo braking system with carbon ceramic discs weighs around 60% less than the traditional system with steel discs. The front is equipped with 380 x 34mm ventilated discs, operated by a powerful 6 piston caliper. The rear discs measure 360 x 32mm with a four piston caliper. The stopping distance is just 33 metres at 100 km/hr with an average deceleration of 1.2g.

At the 2013 Geneva Motor Show a new GranTurismo MC Stradale will debut. It will feature a 4.7 litre, 460 HP V8 engine as well as the MC Race Shift 6-speed robotized manual gearbox which will shift in 60 milliseconds in 'race' mode. The Top Speed is at 188 mph (303 kmh). It will be built at the historic factory in viale Ciro Menotti in Modena.

The push for the Maserati GranTurismo MC Stradale came from existing Maserati customers who wanted a road-legal super sports car that looked and felt like the GT4, GTD and Trofeo race cars.

If you have Maserati and are considering to sell your car, then please call us and discuss your requirements. We offer a very competitive and unique package for all our clients, so please call for further details.

All our pre-owned Maserati's come with the following: